A Walk Around Disneyland With Walt - 2012 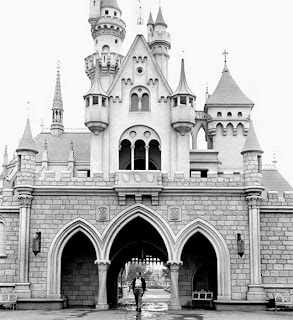 Disneyland is the only Disney park Walt ever set foot in. It was his baby. He lived for the first twelve years of the park's existence. But now its almost 60 years later since Disneyland first opened its turnstiles and welcomed the first guests. Walt was there to greet them.
I wonder what Walt would think of his park today. I don't know of course but I can pretend. Let's meet Walt out on the esplanade and take a walk with him through Disneyland and listen in on some of the things he might say....
"It costs how much to get in here!"
"You got rid of the ticket books? I kind of liked those."
"Ah yes, Train Station, Main Street, all pretty much like how I remember it."
"And Abraham Lincoln is still here. Great. Our greatest president, you know. Why is everyone just walking by without going in?"
"You kept my apartment as it was? Please tell me you at least got rid of all that ghastly red furniture - Lillian isn't coming back."
"What do you mean I can't smoke here."
"I really didn't want any statues of myself in the park, but I gotta say it sure looks nice."
"Jungle Cruise, one of my favorites. Thanks for keeping that one. You really should get a better microphone and loudspeaker though. I couldn't understand half the things that captain was saying."
"Indiana Jones? Who's that?"
"I built Pirates of the Caribbean you know. It sure turned out to be a great ride. Who was that one pirate that kept popping up and in the last scene of the ride? I don't remember him."
"Wait a minute, this isn't the Haunted Mansion I remember drawing up..... Haunted Mansion Holidays? ... not sure about this idea. Not sure about it at all...."
"I hope the guy that built Splash Mountain got a nice bonus. Most impressive."
"This Winnie the Pooh ride is kind of nice and colorful but shouldn't it be over in Fantasyland? I liked those singing bears that were here"
"The Mark Twain boat ride. I'm sure proud of this one. Whatever happened to the keel boats? Your kiddin' - shut down because one tipped over?"
"I sure had a lot of fun in the Golden Horseshoe back in my day. Nice to see it looks pretty much the same even if the show has changed."
"Another mountain? Thunder Mountain? I like it! But the rest of Frontierland seems kind of weak to me."
"You guys really fixed up Fantasyland pretty nice. I can see why its so popular. A lot of its pretty much how I remember."
"it's a small world, I've got to be honest, by the time I left this world, I was pretty sick of that song."
"ToonTown? Seems colorful and a good idea but other than Mickey's house and that spin ride, there doesn't seem to a lot going on."
"What did you guys do with my subs? This is a cartoon"
"What's a Pixar?"
"This isn't the Tomorrowland I remember. This is...... I don't know what it is. I'm not liking what I see at all."
"Buzz Lightyear? Star Tours? Captain EO?  Your killing me here."
"I still see the People Mover track but I haven't seen a People Mover yet."
"I just need to sit down and think about all this... Darn, forgot you don't let people smoke where they want anymore. Causes cancer? Sure wish someone would have passed that piece of information on to me."
"Well I have to say, people still seem to be having a good time, a lot of the park is how I remember it. And like I always said, there will always be something that needs to be done. Starting with Tomorrowland here. This sure got butchered from its original concept over the years"
"Gotta go now. Maybe I'll come back this weekend for another visit. It's Gay days? Isn't every day a gay day at Disneyland....  Oh....."