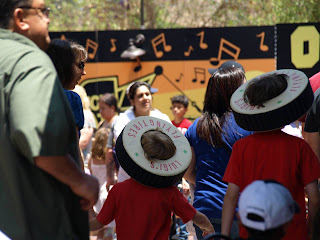 Disney has made their share of stupid looking hats over the years. Sometimes it's been intentional. And of course, these "unique" hats come with an exorbitant price tag. But this one takes the cake. We may have a new leader in the clubhouse for probably the dumbest looking hat I've ever seen. Anyone care to wear a whitewall tire as a hat? When he was much younger, if the Boy would have asked me to buy him at tire hat, I would have had to tell Mrs. DisneylandTraveler to take him to the doctor to see if there was something wrong with him. Maybe he hit his head on something. It could be just me. If a hat like this is your fashion statement, good luck to you.

Then again, I had a Davy Crockett "coonskin" hat when I was a kid. Wearing a dead rat on your head would look pretty silly in 2012.

The only reason, THE ONLY REASON, I would think about getting a hat like this is that many are questioning how long Luigi's Flying Tires will be around as a ride. It may have some collector's value at some point in the future. These things could have a future on EBay.