Indiana Jones & The Temple Of The Broken Down Ride 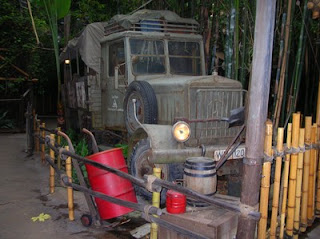 So a couple of posts ago I, unashamedly, admitted that Pirates of the Caribbean was my favorite ride in Disneyland. And while Mrs. DisneylandTraveler loves Pirates, her favorite is the Indiana Jones Adventure. She's not alone. I have heard people sing the IJA praises over and over again for years. It's a huge ride - big in concept, big in what it delivers, just plain big period.

Now I have issues, personal ones though they may be. If you want to get on the ride early before the crowds show up, it is one long walk back to show building first thing in the morning. I feel like I kind of need to run because other people probably already are and I'm just getting in their way. The ride full of bumps, twists, and turns often leaves my spine in a somewhat unforgiving mood the rest of the day. The ride itself is OK but not better than the neighboring Haunted Mansion or Pirates experience.

And then there is the problem with the seemingly endless series of mechanical issues. It breaks down. It breaks down a lot. Sometimes castmembers claim the ride has broken down BEFORE the park opens. It closes for hours at a time at the drop of the hat. The claim is any suspicion of leaking hydraulic fluid from the ride vehicles will cause the castmembers to shut it down immediately to investigate. There is also the claim that many of the show elements of the ride when it opened about 20 years ago either don't work or have been removed leaving true fans somewhat frustrated over how much care and effort have been put into maintaining the quality of the ride.

In the grand scheme of things many people love Indiana Jones Adventure. There are a few, like me, who in a "take it or leave it" proposition could easily just "leave it" and that just ticks Mrs. DisneylandTraveler off to no end.