Poised For The Return Of Jack Skellington 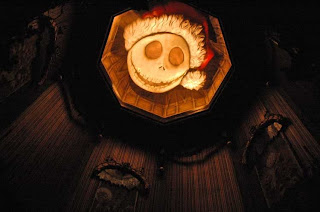 Come Monday, Disneyland's classic Haunted Mansion attraction will be shut down for about 3 weeks for its annual right of passage - the transformation to the Haunted Mansion Holidays which will take over from about mid-September until just after the first of the year. I explained my preference for the overlay version over the traditional HM in a previous post - Haunted Mansion Holidays - The Argument Ensues. Basically, it comes down to this, I prefer the color and clever whimsy of the Tim Burton holiday version over the drab grey traditional version (even though I am no fan whatsoever of The Nightmare Before Christmas movie on which the overlay is based).
But today its a remembrance of what the 3 week closure of the Haunted Mansion is all about. It brings to a close of Disneyland's summer season and the transition into fall and Halloween immediately followed by Christmas. Gone are the long warm days and nights as we move into the ever so gradual transition to shorter days (and shorter park hours) and welcomed cooler temperatures. Especially in the evenings, the ever present shorts and t-shirts are replaced by pants and sweatshirts or jackets.
Yeah... I look forward to Haunted Mansion Holidays because the air conditioning in my house will no longer need to run 24x7, stepping outside will actually be comfortable, and there is always return of college and NFL football.
I like it when Jack Skellington makes his return because I know I will no longer have to sweat like a pig. I like it right up to the point I will inevitably utter the phrase "man its cold outside, I can't wait till it gets warmer".